Problems with the MCP9600 thermocouple amplifier 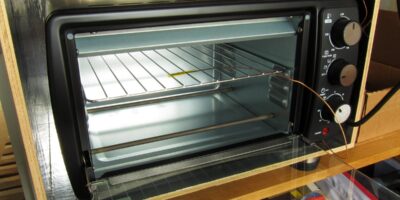 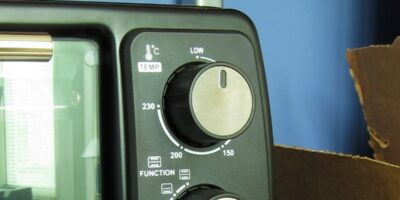 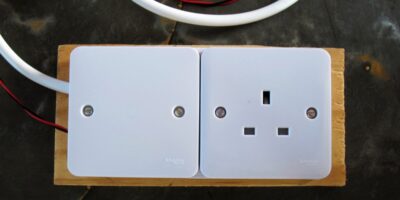 Update 01/04/21: I’ve noticed some typos in the code examples which I’ve corrected.

A bit of background

I’m building a reflow oven to assemble the small projects I’m working on. I could just hand solder everything but that’s quite time-consuming. I’ve bought a 12L 1200W mini oven for around £60 from eBay which I’m intending to use. This is quite a popular option with hobbyists and hackers. The other is to modify a cheap Chinese reflow oven but the price for these start from £150 in the UK I’m having to count the pennies.

My first aim is to create a reflow oven that just works. It doesn’t need to be pretty – it just needs to work. In its most basic form you really only need three things – (1) A heat source, (2) a temperature sensor and (3) a controller.

The mini oven is my heat source. I bought it from this seller on their eBay site. It was also the same oven used by DJ Legion and featured on Hackaday a while back.

For the temperature sensor I’m using the MCP9600 breakout board from Pimoroni which is part of their Breakout Garden ecosystem that I reviewed a couple of weeks ago.

I’ve not started anything with the controller yet but I like the design used by Adafruit’s EZ Make Oven which doesn’t require you to take the oven apart but unfortunately the outlet they use doesn’t come in a UK version so I’m still working on that.

I followed this guide at ABElectronics to set up my Raspberry Pi to communicate with the MCP9600 via I2C. There are common bus speeds with I2C and the MCP9600 datasheet states that it is rated up to 100 kbit/s (otherwise known as standard mode) so I set this as the bus speed on the Raspberry Pi as well.

Pimoroni have a really good GitHub repository for the MCP9600 which allows you to get up a running in a few lines of code – I found the guide here the best. If you’ve connected your thermocouple the wrong way round you’ll find the measurements move in the opposite direction to the actual temperature which is a quick and easy sense check.

I wanted to plot my temperature measurements in realtime so was working my way through a tutorial on SparkFun to do this using Matplotlib. I got to the point where I was plotting sensor data on a graph and was finding strange temperature readings.

Interspersed between what were normal temperature readings values of 16.06°C would be reported back.

I initially thought I was polling the device too frequently with the line time.sleep(0.2) and that was causing the problem so I tried the script with 1s and 3s intervals but I got the same results.

My initial thoughts were that the library created by Pimoroni was causing the problem so started to write my own using smbus2 and created the script below.

(A helpful tip for anyone who tries this themselves is you’ll find yourself constantly converting between Binary, Decimal and Hexadecimal systems – this online converter by ABElectronics will save you a lot of time).

Even with this script however around 50% of the time I was still getting a reported temperature reading of 16.06°C.

At this point I decided that I needed to use my PicoScope and see what was happening on the I2C bus.

I soldered a header onto the Breakout Garden HAT, connected some probes onto the SDA and SDC lines of the bus and set up the scope to analyse the I2C protocol. There a good explainer here from PicoScope on how to do this if you have one.

I stuck with using smbus2 as it would give me granular control of what was going across the bus and put together a short script that just interrogated the device for its device ID and revision number.

Looking at the scope traces there didn’t appear to be anything unusual. You can see the correctly addressed data packet requesting the device information followed by the device sending that information back.

As everything seemed to be working I then added to the code the next step before reading a temprature measurement which was to set the thermocouple type.

I wouldn’t expect this information to change so I dug into the datasheet to see if I had missed something.

Digging into the datasheet

According to the datasheet the device ID is carried in bits 15-8. Both times my device reported this back as 01000000 (Hex: 0x40) which is correct as per the datasheet. So far so good.

This differs from both results returned by my device 0x4040 and 0x4012 so as recommended by the device datasheet I had to look at MCP9600 Rev. A – Silicon Errata and Data Sheet Clarification and it’s here that I found my solution.

Problems with the silicon

The Silicon Errata and Data Sheet Clarification document lists every revision of the device that has been released and explains what issues were fixed in each. Fortunately this was a short document but reading through it I came across a section titled “Intermittent I2C Read Command Clock Stretching Failure”.

Devices that suffer from this problem may fail to Clock Stretch, tSTRETCH, which is used when the device needs more time to respond, and outputs the previously transmitted data.

Frustratingly the suggested workaround of repeating the read instruction until the second byte differs from the first is not very practical as this problem happens around 50% of the time, definitely not what I’d called intermittent.

As this device is the only thing my Raspberry Pi is communicating with and I don’t necessarily need a high-speed interface for my application a second solution is hinted at.

According to the errata document this problem typically only happens at bus speeds greater than 85 kHz. If I slowed mine down to 50 kHz this should fix the problem, no?

When following this guide on ABElectronics I had set the bus speed to 100 kHz. In order to reduce it to 50 kHz I had to edit the following parameter in the config.txt file:

After restarting my Raspberry Pi I ran my last script again.

The first thing to note is that the bus speed had been slowed down to 50 kHz which was a good sign – I wasn’t sure if this value would take as it is not a typical I2C speed.

I ran this script several times and each time got the right response from the device so it looks like the problem is fixed.

When I now try and read the temperature using both the Pimoroni library and the smbus2 script I get consistent measurements.

It took me a good week of evenings to get to the bottom of this issue – reading through datasheets, setting up my scope, looking at the traces. I feel like this is something I was only able to solve given all the equipment I had available to me.

I feel that if companies like Adafruit, SparkFun and Pimoroni are going to be selling breakout boards based on this device they need to provide and bit more information when it comes to using them. It was only after identifying the problem from the datasheet that I found an unassociated page on the Adafruit website which said there might be an issue with this device.

If you’re having problems using the MCP9600 I hope you found this article useful.