Experimenting with the LM2703 DC/DC Converter 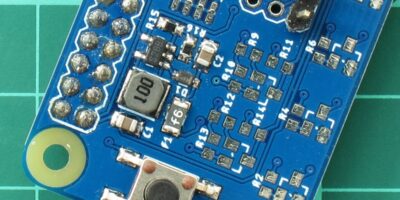 Singing Capacitors aka The Piezoelectric Effect

This is going to be a slightly unusual post but I wanted to write about an issue I came across when trying to prototype a design for a compact power supply.

A project I’m working on needs to power a 12V device from a 5V USB supply. The device itself only needs around 50mA of current. Looking to keep costs down and after doing a bit of research I settled on the LM2703 from Texas Instruments.

The LM2703 is incredibly small, fitting into a 5-pin SOT-23 package and acts as the switch and controller in a simple boost converter ciruit.

All you have to do is select a handful of external componts to get the desired output voltage which is all explained in the datasheet. Fortunately for me there was an example circuit for 5V to 12V conversion which made my life even simpler.

Now I like to prototype my designs on breadboard first where possible however wasn’t sure if I was going to be able to do this with the LM2703 but thought I’d give it a go. The reason I had my doubts is that it’s internal switch has a fixed off-time of 400ns which puts it’s switching frequency in the MHz range – 1.25MHz when you assume an equal on and off time.

On the other hand the wavelength at 1.25MHz is 240m and on a breadboard the lengths of wire I’d be using would be orders of magnitude smaller than this so I gave it a go.

I ordered some parts and when they arrived set about prototyping this design.

The LM2703 was soldered to a SOT-23 to DIP adaptor so I could use it on a breadboard. The power comes in from USB connector in the bottom of the photo which is part of the Analogue Devices ADALP2000 Parts Kit.

I’ve got a PicoScope 2205 MSO oscilloscope which I’ve used to take all the measurements. One channel was conected to the input voltage (red) and the other was connected to the output voltage (green) and no load was applied.

From the scope screenshots you can see that there is significant amounts of switching noise on both the input and output voltages.

Now I forgot to take screenshots for the USB supply when it wasn’t connected but apart from some small voltage ripple this noise was not present which can only lead me to conclude that it’s coming from somewhere else.

Even though I didn’t use overly long wires when mapping the circuit onto the breadboard and tried to be reasonably compact with the space for the design there is clearly a sensitivity to noise.

The datasheet has a section on layout considerations and beyond keeping your bypass capacitors as close as possible to the IC it does say you should minimise copper trace connections for the feedback network that can inject noise into the system.

I didn’t any spend time trying to figure out exactly why this might be happening for me but this approach was clearly not a success. Ultimately I’m still plannng to use the LM2703 in my design but I’ll have to prototype something on a PCB. Until then I’m using a similar 12V step-up converter from Pololu until I’ve finished breadboarding a rough design for my project.

Singing Capacitors aka The Piezoelectric Effect